Hi there! As promised I continue to work on adding and improving the standard widget set. Three new widgets have made their way into the latest release:

Another significant improvement in this version is the vertical scrollbar property:

I am still pondering whether I should also add a property for the horizontal scrollbar. My feeling is that it’s a less common requirement and adding support for it would just clutter the interface. And you can always use the Horizontal Scrollbar widget whenever you need one. If you think otherwise then make yourself heard!

The Tree widget was updated to support background color and selection properties.

Eclipse 3.5 Galileo is finally out. I will be updating the installation page shortly. For now to install WireframeSketcher under Eclipse 3.5 just follow the instructions given for Eclipse 3.4.

Hi there! It’s time for a new update. The main feature of the latest version is the support for widget states.

Widget states allow you to show that a widget is disabled, focused or selected where appropriate. For example you can show that a text field has the focus or that a button is disabled:

Another useful addition is the border property. It allows you to turn on and off the border for Panel, List, Table and Tree widgets.

I’d like to talk a little about the upcoming release of Eclipse 3.5, codenamed Galileo. I’ve spent some time testing and fixing small problems that appeared under this version. I am happy to say that WireframeSketcher is ready for Eclipse 3.5.

An important addition in Eclipse 3.5 is the new support for Mac OS X Cocoa. The Cocoa version takes advantage of the more modern API and it’s the future of Eclipse on Mac. However, being the first release, it’s not without its problems. There are issues that make certain features of WireframeSketcher unusable. My advice is to stick for now with Carbon and wait for the release of Eclipse 3.5.1 before making the switch.

Here’s the list of other notable improvements that have made their way into this version. For a complete list of changes and bugfixes see the changelog.

Hi there! Almost a month ago a saw a blog post by Max Andersen titled Instant Mockup for Eclipse SWT Applications. In this post Max exposes a brilliant idea of an Eclipse plugin that dumps SWT UI to Balsamiq’s BMML format. I instantly thought that this idea is a perfect fit for WireframeSketcher.

When you need to revise the UI of an existing application it’s only natural that you’ll want to start with something. Why would you want spend your time redrawing the UI that is already there?

Thus I present you the WireframeSketcher Spy plugin! How it works? Open the dialog you want to mockup. Press Alt+Shift+F5 and the XML of the mockup is put into the clipboard. Open the “New Screen” wizard, and on the second page paste the XML. Hit Finish and you are done!

So take for example the standard Search dialog: 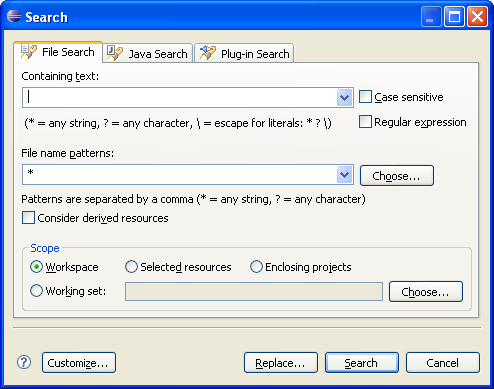 And here’s the result that you get: 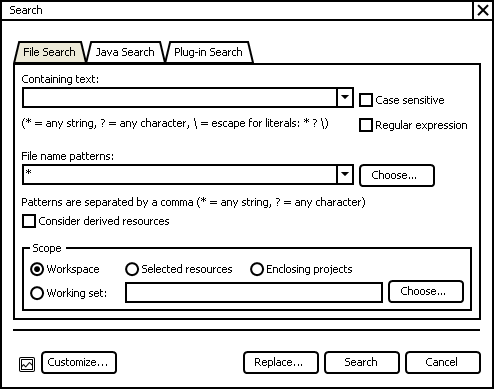 Here’s a quick screencast of the Spy plugin in action:

WireframeSketcher Spy is provided as a separate plugin: com.wireframesketcher.spy. You just need to make sure that this plugin is included in your environment when you launch your Eclipse plugin or the RCP application.

I realize that there is also the case of standalone SWT applications. I plan to provide a separate JAR file that you’ll be able to bundle with your app. I’ll also have to design some minimal integration API. If you are interested in a setup like this please drop me an email.

I’ve made some changes to the Note widget. I’ve removed the red bar and changed the color to something lighter. The widget now also supports the text alignment property. Thanks Timo for your feedback!

Another change concerns the “New Screen” wizard. There is now a second page that allows to paste an initial XML. Apart from the Spy feature you can also use this functionality to copy the XML from the web, email, etc.

As usual to update to the latest version of WireframeSketcher just use the Eclipse update manager. I hope you’ll have as much fun using the Spy as I’ve had implementing it!