Are you ready for a new release? Because I am! I couldn’t wait until after the holidays and I wanted to get it out now. The new version brings a major feature many of you have asked for so I hope you’ll be as excited about it as I am. Read on for more details.

Storyboards are a really useful feature. They are like a built-in PowerPoint that lets you create slide shows, export them to clickable PDFs and show them on screen. However one major complaint about storyboards is that they are linear and don’t allow you to visualize a more complex navigation structure.

So today I am releasing a new Screenflow editor that lets you organize and visualize storyboards in a more graphical way: 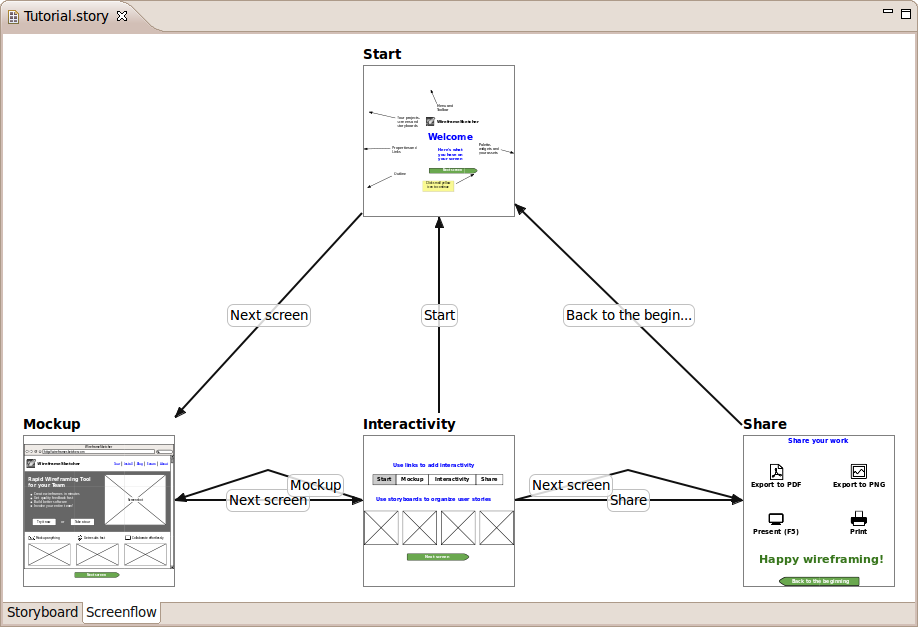 As you can see it’s just a new tab in Storyboard Editor. This way you keep all the advantages of storyboards and gain a new way to work with them.

Following the mantra: “Release early, Release often”, I intentionally kept this version very simple. I welcome you to try it and let me know how it works for you and how you’d like it to be improved.

The version number of this release is 2.5.0.

First, I want to thank everyone for your feedback on sketchy theme from last release. It looks like it was a must-have feature for many of you and I am happy that we could finally cross it off the list.

Now it’s time for a new release. The new version brings several UI improvements, a few new macros and a number of bug fixes. Read on for more details.

I receive from you quite a few requests for palette improvements. Some of you want visible categories – some don’t. Some want better scrollbars and others would like to see recently used items.

To solve them I tried to go into a different direction. I made some changes to Quick Add dialog in the hope that it will improve your workflow and make you use the palette less. 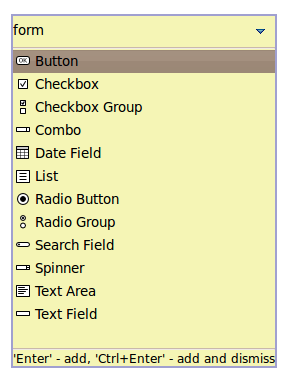 To remind you, Quick Add dialog is invoked using Ctrl+Space shortcut. Once opened, you see a list with all widgets that you can filter by typing in text field at the top.

What’s new is that now when you press Enter the selected widget is added instantly to the screen but the dialog stays open and you can continue adding widgets. This way you can quickly populate the stage with widgets you need and then proceed with laying them out. It’s quick and you can do it using keyboard only.

So let me know what you think and I hope that you’ll use Quick Add more and the palette less!

Many of you want more control over exported PDF documents. This includes being able to display information such as file name, save time, export time and page numbers. So here are a few new macros that will help you with this:

Remember that Ctrl+Space is your friend when typing these out!

The version number of this release is 2.4.1.